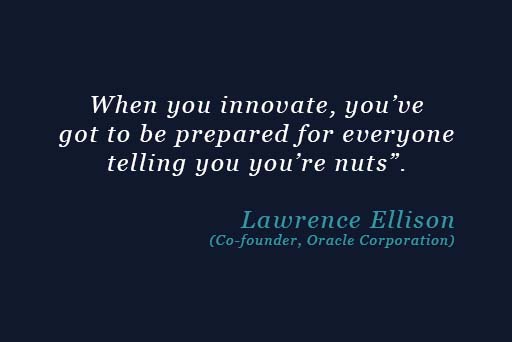 Millions of people dream of quitting their jobs and starting up their own business but most end up never taking the plunge. And while there are nearly 5 million small and medium-sized businesses in the UK, around half don’t survive the critical first three years in business. For those still making plans, as well as those starting out on their own, the business struggles of highly successful entrepreneurs can be a great source of inspiration and knowledge. Here are some valuable lessons to be learned from business leaders who know what they’re talking about.

“You need to be better than the people you are competing with.”

Providing something superior to your competitors – whether your edge lies in quality, price, marketing, customer service or another aspect of business – is of paramount importance to new companies. Richard Branson learned this lesson the hard way when his new Virgin Cola tried to compete with Coca-Cola – and was crushed by their marketing money and powerful distribution network. The failure of Virgin Cola did little to slow Branson down, however, and today he is among the UK’s most successful entrepreneurs and richest men.

“Focus on your Plan A, but know what to do if there’s an emergency.”

When starting out in business, you need to plan as thoroughly as possible for every contingency. However, even if you do everything you can think of, something is likely to happen that you didn’t see coming. That’s why you need to have a Plan B in place and respond quickly to changing circumstances. This was the lesson learned by soft drinks entrepreneur Richard Reed, after his two biggest suppliers quit on him simultaneously – with 24 hours’ notice! He got through it by having a back-up plan already formed. If not, he would have been out of business.

“Make a lot of mistakes, as long as you make a few successes.”

Most successful entrepreneurs aren’t successful in everything they do. The difference between them and failed entrepreneurs is that they pick themselves up, use their failures as an opportunity to learn and try again. Peter Stringfellow has been in business for over 50 years and has made his share of mistakes along the way. He tells young entrepreneurs not to be “frightened of failure” – it is passion and true entrepreneurial spirit that counts. If you have that and you don’t give up, you’re certain to succeed eventually.

“Disneyland is a work of love. We didn’t go into Disneyland just with the idea of making money.”

Money may make the world go round, but if that’s all you care about with regard to your business, you may not have the stamina to survive the hard knocks you’ll take on the road to success. If you love what you do, and are passionate about your business idea, you’ll keep going no matter what. A reporter once told Walt Disney he “lacked imagination and had no good ideas.” It was the love he had for his work, as well as his tenacity, that led to his unparalleled success.

Running your own business is a high-risk venture. There’s a lot at stake and companies can fail, even with a great product or service. However, if you’re not prepared to take risks, you should find another line of work. Doug Richard is philosophical about a risk he took in taking shares over cash when he sold his second business, a software company. Three months later his shares dropped by 99%, wiping him out at the time. With the power of hindsight, he also advises young entrepreneurs selling up to “take cash”.

“When you innovate, you’ve got to be prepared for everyone telling you you’re nuts.”

To stay ahead of your competitors in business, you’ll need to innovate. If your innovations are too far ahead of your competitors, you may be laughed at and start to doubt yourself. However, if you have faith in yourself and your ideas, trust them and not the nay-sayers. That’s the lesson to be learned from Larry Ellison, who has used his innovative skills to turn his enterprise software company Oracle into one of the world’s most recognisable brands. At the same time he has become one of the world’s richest men – not bad for a guy who once had to mortgage his house to obtain a credit line.

There are many lessons to be learned from the struggles as well as the successes of the world’s leading entrepreneurs. Take heed of their wisdom, channel their knowledge and turn your own business dreams into reality.

If your business is currently struggling, call us today for free expert advice from a member of our team. Alternatively, use the online enquiry form, or email [email protected]

Visit our advice for businesses page for more information.

What Is a Good Business Debt Ratio?

Previous Who Is Responsible for Business Debt?