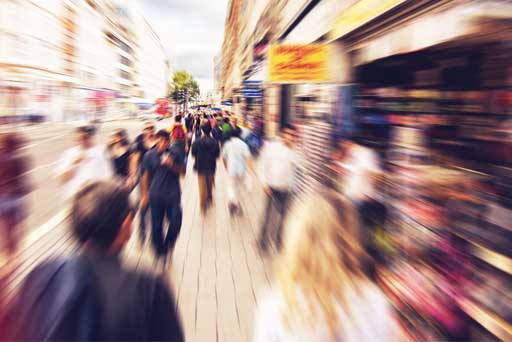 The number of people shopping on the UK’s high street in November dropped to its lowest level since the 2008 recession, retail researchers say.

Whilst ‘Black Friday’ does influence retail sales, it is encouraging people to do more shopping online rather than in person – so it doesn’t benefit the high street stores.

It’s believed the problem could worsen each year, with Springboard estimating a further decline of 4.2% year-on-year in December. Diane Wehrle, the company’s marketing and insights director, said:

“These figures are the worst footfall figures that Springboard has recovered since the recession and we’re not actually in a recession.”

It’s clear that something significant is happening out there in consumer demand. It has really railed back this year.”

The growth of online shopping has been one of the biggest challenges faced by high street retailers, many of which have collapsed in the last year as a result of the worsening trading conditions.

It is feared that if solutions aren’t found the fall in physical shopping could result in the collapse of more high street chains.

Springboard has warned that Brexit uncertainty is also having an impact on shoppers’ habits.

Mr Wehrle said: “As we head into the zenith of the retail trading calendar, both retailers and consumers alike are in the midst of the greatest degree of uncertainty in recent times.

“However, the fact that the Parliamentary vote is not taking place until the middle of December might deliver a slight glimmer of hope for some large-ticket item retailers, as consumers may purchase now rather than later, in an attempt to outrun inflationary pressures that are expected should the Brexit deal not be ratified.”

If your retail business is struggling and you’d like some (free) professional advice on what to do next, we can help you.

Previous What is the ‘Targeted Anti Avoidance Rule’?

Next Getting help for your struggling online estate agency