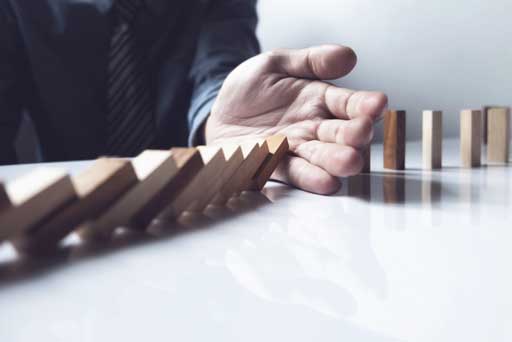 Over a quarter of UK companies have suffered a hit to their finances following a customer, supplier or debtor’s insolvency in the last six months, according to new research.

The figures also revealed a so-called “domino effect” which means that one company’s insolvency can increase the insolvency risk for others. In the first quarter of this year, a spate of high profile insolvencies involving large companies such as Carillion and Toys R Us caused related insolvencies to climb 13% from the previous quarter.

Andrew Tate, spokesperson from R3 says: “No business exists in isolation, and every headline-grabbing corporate insolvency will have consequences for numerous other enterprises. In the worst-case scenario, the loss of a vital business relationship can lead to a company’s own insolvency in turn – the ‘domino effect’ in action. Recently, we have seen a string of insolvencies of high-profile companies, from Carillion to Toys R Us, which will have caused upheaval at other companies.”

Here at Clarke Bell, we often see an increase in requests for advice from companies after a large company goes into liquidation. These companies are often much smaller than those that hit the headlines, so their struggles often go unreported in the media. The frustrating thing for those company directors is that they haven’t done anything wrong, but they suffer as a consequence of others’ problems.

Construction companies were the most likely to say that the insolvency of another firm had had a negative impact on their finances in the last six months, with 47% reporting a hit.

Wholesale (35%) and transport (33%) were the next sectors most affected.

Andrew Tate of R3 added: “Middle-sized companies are less likely to have the same resources focused on credit control as larger ones, especially if they have grown rapidly without ensuring their systems have kept pace. Reliance on a single supplier or customer can also be an issue in this space, meaning that any difficulties in a supplier or customer may have a disproportionate effect.”

Are you experiencing the knock on effect of an insolvency?

If you are, we can help you.

What is the Knock on Effect of Lockdown on UK Businesses?

Has your business been affected by rising employment costs?

Previous What is the best way to close down your successful company?

Next What to do if you have received an Accelerated Payment Notice (APN)?